A NATURAL HISTORY OF GAY LOVE

Knowing our land used to rest
deep down, south of Florida, long before

Google street view, I think of how we, too,
have drifted. Once upon a time, my love,

we were flow awaiting eventual form: microbes,
schools of barracuda, sharks. These bodies

but, this time around, our skin is perfect.
If we swam backwards in time, we could meet

our queer protocells splitting and merging,
drift and seafoam. Glowing like coral

in the shelf, we might’ve first met
on our land long before these lives.

After so long, we’ve been drawn back
to our beginning, this garden the sea became.

LOVE SONG FOR A FLOATING BOG

Coming to life in floods, my weedy monster
breaks loose from shore, forces

white speed boats off the waves.
I know you won’t love me back.

But for my beast bigger than a football field
I’ll croon of your rebel moss,

dirty roots and reeds with throats and legs
like swishy millipedes.

Do you think and see down there,
underneath willow trees hitching a ride

to the deeps? The locals hate
when you bump into their docks,

tangle their motors, bubble and fester
alongside their beaches. Phew.

Their dynamite didn’t even dent you.
To frogs, you’re a safe, swampy oaf.

They live peaceful on your back with ducks.
Following your life cycle along currents,

you will go under, one day, soon.
Before the end I want to canoe

to your spongy body, step on, risk
falling through to your scummy underside,

rootwork and goo. Nevertheless, I trust
in your descent. When the lake takes you,

I believe you will still breathe
through the leafy tips of your tallest tree.

MEDITATION ON BELLS AND BEARDS

shrivel to polyps. Tentacles retracting
and bodies shrinking to primitive

testicles, they start over,
injury and disease now their only endings,

much like all the men who’d do it different,
right or all over again. This time

to grow older, kinkier
with a fairy tale condition:

if they ever jerk off in a group,
every cell of their bodies will know

woke them, but with the wisdom
and regrets of seasoned sluts.

Solo in their own beds, some shy ones
will choose to gray. In each other’s hands,

the thrill seekers will turn their trick together,
an eternity of boying and beasting.

Whenever I thought of becoming a horse,
I assumed it could start with my spine

sprouting a tassel. From the waist up
a man would remain, but my legs

would double beastly. As a gay wish,
it was typical as a unicorn.

Had I forced it, the transformation
would’ve proceeded unexpectedly

as I grew tiny instead of large,
my legs vanishing into a curling, hairless tail.

I got it all backwards.
I’ve never really wanted to gallop.

Instead, my longing has been to shrink
as far from human as a body can dare

without losing the self among microbes.
My desire isn’t to hunt like a centaur,

but to change into a seahorse
and carry the young within my womb.

among oysters changing genders
to protect my brood from gulping schools.

Michael Walsh is the author of The Dirt Riddles, which received the Miller Williams Prize and the Thom Gunn Award for Gay Poetry, as well as Creep Love. He is the editor of Queer Nature, an ecoqueer poetry anthology that Autumn House Press will publish in Spring 22. 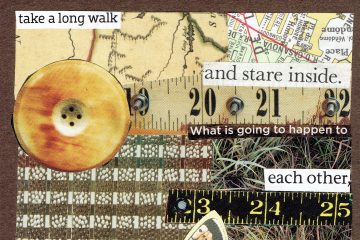